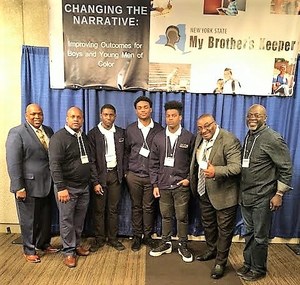 We are excited to attend the My Brother's Keeper Symposium and further support the progress and growth of our young men of color.
The New York State Education Department will host the 2018 New York State My Brother's Keeper (MBK) Symposium on Friday, April 27 and Saturday, April 28 in Albany. More than 600 students, parents, educational leaders, and citizens from across New York State will gather for a two-day symposium on the MBK initiative to help boys and young men of color - and all students - realize their full potential.
A webcast will be available on NYSED.gov from 7:30am-2:00pm and 4:50-5:15pm on Friday, April 27. We encourage you to watch live.

In 2014, President Obama established the My Brother’s Keeper (MBK) Task Force at the federal level. The Task Force was an interagency effort focused on closing and eliminating the opportunity gaps faced by boys and young men of color so that all young people have the chance to reach their full potential.

With the adoption of the 2016–2017 New York State Budget, New York became the first state to accept the President’s challenge and enacted the My Brother’s Keeper initiative into law. The budget included a $20 million investment in support of the initiative to improve outcomes for boys and young men of color.